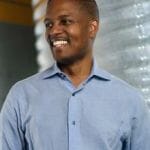 Vernon Williams is the Chief People Officer for KCMN member manufacturer, Dimensional Innovations.  Vernon’s contributions to manufacturing are in finding and retaining great talent and helping create a positive culture for the employees his team serves.

Vernon was drawn to Dimensional Innovations because he believes in their purpose, “To liberate people from mediocre experiences.”  This purpose aligns with his personal brand statement, “To lead and serve with integrity”  which is an intentional pursuit he chooses each day.  Vernon recognizes that many times, his ability to show up and enact that intention isn’t just for him, it’s for the people he does his best to represent.  This allows Vernon to represent his team and organization during the tough conversations and bring perspectives that need to be brought into the room.  He finds the pursuit of “what if” and “what could be” exciting, a valuable mindset for anyone in the design+build sector.

Vernon is most proud of seeing people he has had the privilege of leading and coaching move up to do great things.

One of his favorite quotes is from Black American educator, author and advisor to several presidents of the United States, Booker T. Washington, who said, “Character is power.”  Vernon adds, “Character is something you own and whose value can rise and fall based on your own actions. It reflects your true self and only YOU are in total control of it!

Vernon is active in KCMN’s HR/Workforce subgroup with shares bests practices with other HR professionals across manufacturing companies in the greater KC area.

As a child, Vernon grew up around people who were in the court system and thought he wanted to be an attorney.  This led to an undergraduate degree in Business and Political Science from Washburn University.  Everything changed when a college advisor told him he needed to start preparing for the LSAT and asked why he wanted to be an attorney.  He realized he had no clear purpose in that career choice and learned the value of being more purposeful when making career decisions in order to have fulfillment.  Though Vernon had progressive roles in advertising and marketing, it was taking hours toward a Master’s Degree in Hospital Services Administration where he discovered his initial interest in HR.

He also invests in the Kansas City community through his service on several area Boards.  These boards demonstrate his passion for empowering people and giving back to the community.